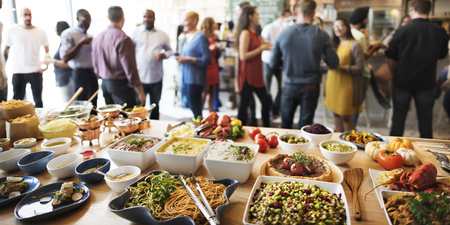 Does the title of this post seem somewhat oxymoronic to you? “No way holiday treats can be tasty AND healthy!” you say.  I disagree and I’ll provide some examples to defy that claim later in this post.

Each year, starting Labor Day, like a stampede of bulls in the streets of Pamplona, come the holidays: Rosh Hashanah, Yom Kippur, Sukkot, Halloween, Thanksgiving, Hanukkah, Kwanzaa, Christmas, and New Year’s. Our senses are assaulted by decadent delectables loaded with bad fats, processed sugars, salt, gluten, and starch. Not just at work or at friends’, but at the bank, in the gym, and even at the gynecologist’s.  Lemon bars, spritz cookies, rugelach, chocolate fudge, and pecan sandies  are everywhere.

To forgo these traditional treats, and others like latkes and kugels, stuffing and pie can seem almost sacrilegious during holidays. At least to the devious foodie part of my mind that bombards me with reasons to indulge (at all or with multiple helpings), like “You’ll make your hostess feel good” or “You’ll never find sausage and cornbread stuffing this good again.”

But I am not just a foodie.  I’m still a bit overweight with  some borderline bloodwork (re: cholesterol and blood sugar) and a history of eating for pleasure and comfort, especially when things go wrong, or I’m feeling fearful, frustrated, or feeling down.

I am not alone in this.  The fact that almost 40% of the world’s adults are either overweight (with a Body Mass Index over 25) or obese (where the BMI is over 30) suggests that unhealthy (junk) food is widely being used by them as a mood altering drug, not just a source of nutrition.  And the same is true for even very young children. The World Health Organization reports that the number of overweight or obese children up to 5 years of age was 42 million in 2013, and expects it to be 70 million by 2025.

Bringing this closer to my home, the current obesity rate in the greater Los Angeles area, which includes adults and children, is 24.5%.

Years ago, a study at Tufts University showed that for those already obese or overweight, holiday porking can pack on at least 5 pounds, which I know, from past experience, can hang around as a muffin top for months, if not years, after the tastebuds have been titillated.

The study also found that among the non-overweight population, the amount gained during the six weeks from Thanksgiving through New Year’s accounts for 51% of annual weight gain, which is typically 1-2 pounds in adults.  While this may not be cause for much concern during any given year, the accumulation of these pounds year after year certainly contributes to an substantial increase in health risks.

Besides issues pertaining to physical well-being, pigging out causes other unwanted side effects, such as sluggishness, brain fog, the discomfort of clothes I can barely button, and the embarrassment from unsightly back fat beneath a clingy top.

Well, it doesn’t have to be that way.  The deliciousness of the holidays need not be sacrificed, triggering feelings of deprivation and exclusion. We can allow ourselves some of the most mouthwatering indulgences without the added pounds and guilt, if most of the scrumptious edibles we consume are healthy AND  tasty.

It takes some planning ahead and preparing, but that’s well worth it, especially since there is an added bonus: we practice developing a mindset that supports acting with self-love and self-respect, rather than giving in to self-defeating impulses. Each time we make healthy choices, we reinforce the probability that we will do so on the next occasion when a choice is called for.

We can prepare ourselves mentally to dial back our gluttonous inclinations, using hypnosis to motivate and encourage saving calories on Tuesday that are spent Friday partying more wisely.

We can also use hypnosis to cultivate an attitude of merriment that doesn’t depend on food. There’s still time to imbed into our subconscious a holiday mindset that incorporates other ways of celebrating with those we love.  Some of these ways involve being out in nature, and moving the body: shooting hoops or touch football, hikes in the mountains or walks by the beach, snowball fights, ice skating, sledding, cross-country and downhill skiing, are just a few, including walking the malls while holiday shopping

And not all the fun has to involve physical activity or being outdoors.   We can read, take winter naps, watch classic holiday movies (e.g. It’s a Wonderful Life), cuddle by the fire, play boardgames, cards, and computer games, listen or play music, call friends and loved ones far away.   Let’s challenge our imaginations to create fun ways to celebrate that nourish the soul as well as the body this season.

As promised, here are links to just a few recipes I’ve come across that fit with my “Tasty, Healthy, Quick & Cheap Holiday Treats” philosophy.  You’re sure to uncover a treasure trove of others with some basic Internet keyword searches of your own.

I’m a big fan of eating pizza anytime, including breakfast.  Granted a cauliflower crust pizza may not be as mouth watering as a thick cheese-and-bacon stuffed crust one, but around the holidays, I make an attitude adjustment. I gladly save calories on savory snacks (provided they are still yummy) so I can spend them on sweets. This pizza lets me do that. Free of grains and gluten, this  treat is only 300 calories for half the pizza, I can even add a little pepperoni, ham, bacon or sausage, as well as other veggies, while keeping it low-calorie and delicious.

With all the vitamins (e.g. 77% of daily recommended C), minerals, anti-oxidants, complex carbs, fiber, and heart healthy Omega-3 fats, and cancer fighting properties in cauliflower, eating this comfort food is actually doing something good for my health.  Give this  Paula Deen pizza recipe a try.  It’s a “sneak in the vegetables” dish even your kids will enjoy.

And if you’re like me, you don’t believe microwaving food is healthy, so steam the grated cauliflower in less time and substitute your own cheaper and healthier cooking spray instead of an artificial one like Pam.

Total prep and cooking time is about 30 minutes and costs about $8.

If you’re strapped for time, Amber’s quick turkey pinwheels are a great way to enjoy some of the traditional Thanksgiving Day fare without having to cook.  To make them healthier, I suggest using neufchatel cheese with less fat and calories than the regular cream cheese. Also, her recipe for cranberry salsa sounds delish, but if you prefer not using sugar, try this healthier cranberry sauce recipe from Wellness Mama.

I can’t imagine Hanukkah without latkes.  I used to feel guilty eating them and deprived if I didn’t.  When I started eating more healthy, I switched out white potatoes for less expensive sweet potatoes and use coconut oil or olive oil instead of controversial canola or others. Sweet potatoes have more vitamin C, 400% of the daily requirement of vitamin A, fewer calories, more fiber, and fewer overall carbs. They also serve me as a “go-to” snack to satisfy my sweet tooth, with only 7 grams of sugar each. I would tend to feel guilty eating traditional latkes, but deprived if I didn’t.

That’s when it occurred to me that sweet potato latkes would be a great compromise. Here’s Alexandra Caspero’s recipe I found online that could make many a traditional latke lover a convert.  She provides two versions: one fried, one baked, along with suggested condiments for each. The baked version has about 20% fewer calories and close to half the fat, and takes only about 20 minutes to cook.

My favorite holiday drink, hands down, is egg nog.  One sip of that cold, creamy, sweet and rich libation has my tastebuds flipping out and begging me to down the whole quart, which I have done, I confess, home alone. So knowing I would be too embarrassed and humiliated to do that in front of people, I have since restricted my egg nog indulgence to a cup at a party.

I don’t know if they still do have it, but Jack in the Box used to feature an egg nog milkshake that was to die for…and maybe from. Just thinking about all the sugar (103 g), bad fat (54 g), and calories (1135) they used per cup make my arteries shudder.  Luckily, the one near my neighborhood shut down, so the temptation to indulge was removed.

I have gone back to using unsweetened almond and coconut milks since I found some organic brands (e.g. “New Barn” and “three trees”) without carrageenan, an additive in most other brands that has been linked to malignancies and stomach problems.

The non-dairy egg nog recipe that I am really eager to try comes from Erika. Her almond and coconut milk egg nog concoction sounds delish. It features organic eggs, maple syrup instead of refined sugar, and of course, vanilla extract and nutmeg for flavor.  Erika says the hardest part of making the nog is separating the eggs.  No biggie!

For many, a day without chocolate is  a day without sunshine, and holidays are no exception.  If that sounds like you, this 5-minute “healthy sneak” dessert recipe from Erika will jingle your bells. Its surprise ingredient is a  superfood loaded with good fat and other nutrients to help protect the body from heart disease, cancer, and degenerative eye and brain diseases.  The recipe serves four and costs about $10 to make.  Go check it out.

If you’d like to treat yourself to some hypnotherapy or learn how to use self-hypnosis as a coping strategy, please call me, Ellen R. Coleman, C.Ht. at (310) 422-9913 or contact me by email: [email protected].  Helping clients achieve their goals makes my spirit soar and my heart sing!